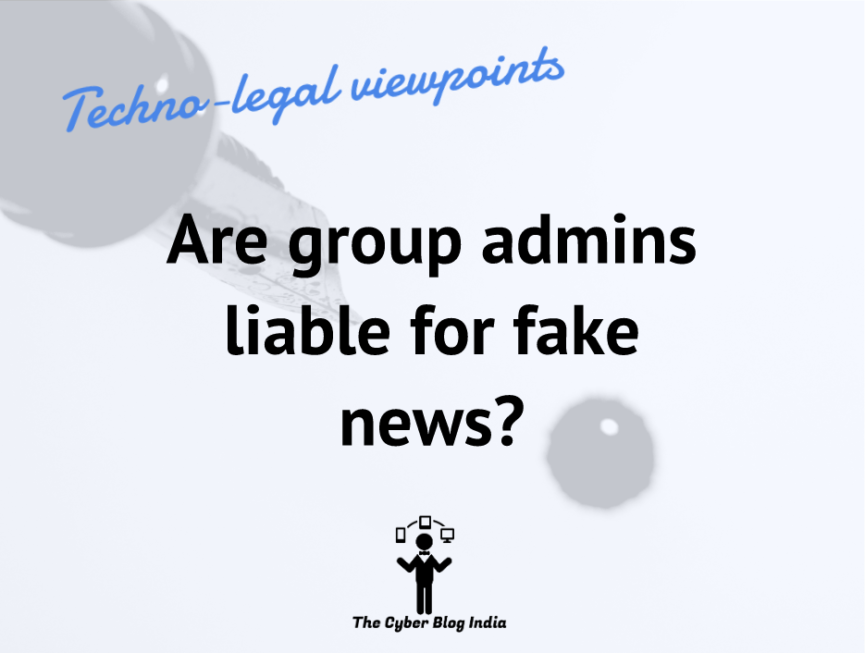 Recently, WhatsApp has been the centre of attraction of many debates in India. Some calling action from the communication platform and some seeking assistance and accountability. While the pressing reason for this remains the incidents of mob lynching and the spread of hateful/fake/inciteful images, videos, news etc. over chats, new developments are only giving birth to newer challenges for both the state and the citizens.

There are many issues that surround this bigger conundrum of WhatsApp, Intermediary liability and responsibility, free speech and freedom on the Internet. Somewhere along the cracks, there is another issue of Internet shutdowns picking up the pace. This post, however, is limited to analysing the liability of WhatsApp group admins for fake news, obscene content etc. that spreads via members on the group. Recently, after an MHA notice to the chat platform, WhatsApp has replied stating that they are rolling out newer updates like increased control of an admin over who can message in a group and the forward label. While the excessive power being vested in the group admin does seem like an affirmation of the accountability that an admin must have, the legal standpoint is unclear. There have been many reports and attempts in the past about making group admins responsible and accountable, like the one in Varanasi and Kishtwar recently. Not looking at the social aspect of it, the position in law has to be dealt with in order to better understand how the law translates and adapts to a situation like this. Though such liability should be general and not specific to WhatsApp, it seems that with the recent and ongoing updates, the situation might change.

On the rules of publication

It does seem logical mostly to relate traditional spaces with online ones to understand the application of law. In this case, one has to look at the publication of a newspaper conventionally in order to understand liability fixing when there is no provision in law for the cyberspace in India. While there is no general liability upon the owner of a newspaper (no criminal whatsoever) for content being published in a newspaper, it is also not absolute. When it can be proved beyond doubt that the owner had some involvement in the motivation for such publication which is either inciteful to an offence or defamatory even, he can be held liable. It is debatable, however, whether a group admin is actually an owner in this sense because he does not control the content that is published in the group. Even if it is only other admins that have rights to post in the group, each of them would be liable for their own postings if the others had no role to play or conversely the culprit would have to prove that the others had involvement and sufficient participation. The takeaway from this discussion as is also reflected in K.K. Mathew vs K.A. Abraham is that even a group admin can be liable (if he’s thought to be the owner/content editor and if he has sufficient involvement, intention etc. for the publication). The admins in this context have no fixed liability but no absolution from it as well. It is like that sword which has both the edges.

There is no clear provision in the Indian law or a case that sets precedent in this matter. What is vaguely used by many experts and commentators is the 2016 Delhi High Court Judgement in the case of Ashish Bhalla vs Suresh Chowdhary & Ors. One paragraph in the judgement which read as under picked up good media attention:

When looked at closely, this case was about an almost civil matter that was through defamation connected to this understanding. In my legal understanding, this law point actually does not have much weight because today admins do have greater control over content in groups and we are not just looking at defamation. The issues and challenges on the ground have become more serious. 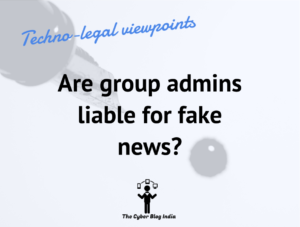 Is a group admin an Intermediary?

This is an interesting question and one to which I found various supporting comments during my research. The strict answer to such a question in my understanding would be ‘No’. Calling a group admin an intermediary is defiant of Section 2(w) of the IT Act, 2000 and principles of basic logic. If one were to absolutely think of online spaces as restricted modes of communication with a group admin doing the actual job of receiving and sending the communication, perhaps then this wild assumption may be right. The legislators’ opinion and intent in drafting Section 2(w) of the IT Act are clear from the text itself- there is a degree of control or at least technology enablement at their end which makes them intermediaries for facilitation in the true sense.

Just for the sake of academic debates, if we were to consider admins as intermediaries, even then their criminal liability for content in their groups does not arise. It is a settled matter through Shreya Singhal vs Union of India and a few precedents that follow that an intermediary has to be apprised of content to be removed through court orders. In any which way, which the admin cannot do. As per the law, an intermediary is supposed to remove content reported to them within 36 hours of such knowledge but technologically, it is not possible to be done on a group by an admin which again absolves him of this blanket definition of intermediary.

But my legal viewpoint does not favour the admin in the end. Whether an admin can be liable or not for criminal activities such as complaints arising out of Section 153A of the IPC has to be a contextual and very case specific observation. Arrests can definitely be made under the provision now that the law and order situation is such that the primary objective is to protect innocent lives. What happens to these arguments of liability in court is a matter yet to be seen.

One thing, however, is clear in my opinion: An admin is not liable prima facie but if it can be proved that he had the intention/motivation/involvement in such publications in a group that led to defamation/promotion of ill will, hatred etc. among communities, then he is liable for criminal action. Even the language of Section 153A requires the accused to be promoting enmity through any means. But we should still keep this in mind that incidents of mob lynching targeted at particular individuals still do not fall under Section 153A of the IPC which is very specific for enmity between groups, communities not against an individual.