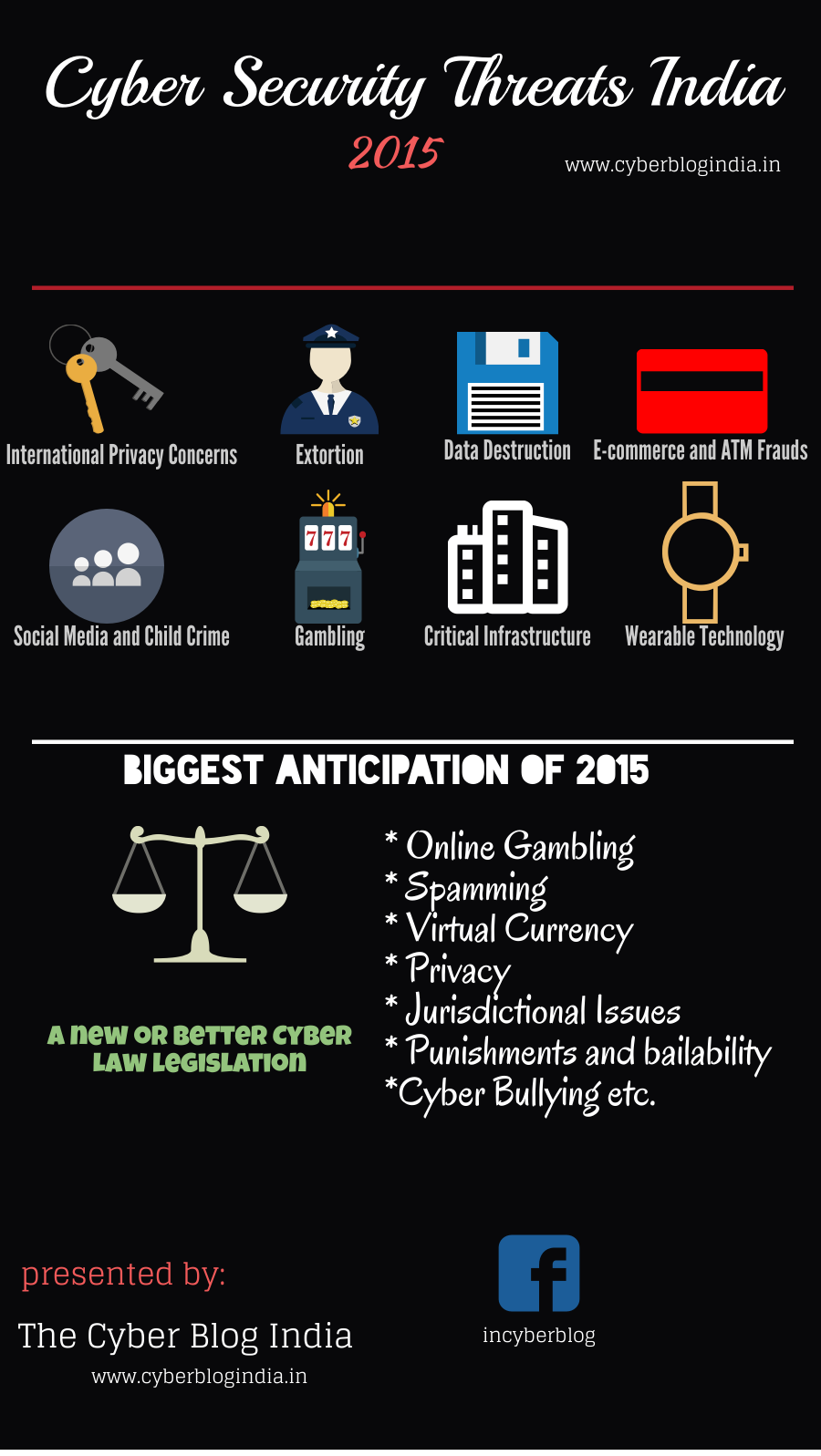 There is a lot of buzz about what is going to happen in the year 2015 in the cyberspace. As far as technology goes, we are definitely hitting the cloud big time, newer credit card technologies, better encryption, new backends and more secure systems. And when we talk about crime there’s a lot more in numbers for India, The Indian picture of cyber crime has seen only ups in the past decade and extreme rises in the past couple of years. An Assocham-Mahindra SSG study has predicated recently that cyber crime in India will hit the 3 lakh figure with more than a 107% increase rate as of now.
The E-Governance system in India is growing, more online shopping portals for anything to anything are opening. We are digitizing ourselves very fast but are we ready for what is to come. Not just for 2015 but for years down the line too. A major report marking the new year gave a few head notes about what is expected in the cyber security domain in 2015. Here is our version of it.

As a nation we have started the make in India campaign. It is time we start a set up(Servers) in India campaign too. Any leading servers that Indians access are based out of Europe or USA and NSA has its strict monitoring policies and India has no privacy law. The real fight about this is actually going on far west, in India what we expect is an ever higher crime rate with the non sophisticated crimes also.

Extortion scams are expected to be on the rise. Who hasn’t heard yet must check out the Sony extortion case. This extortion was about a promise to shelve The Interview( a movie released online). At rather smaller scales and what requires minimum skills it is based on ransom-wares. Now ransom-wares haven’t reached India yet and if there is some time, it is now that ransom-wares hit India with spam SMS’s easier and services like mobile money coming into the scene.

Data theft and the corporate issues have been around for quite a while in India. Data is the most priced possession of any company or government. And this loss is expected at bigger stakes. The Sony hack also posed this scenario as a matter that companies and organisations in India also need to look into. Then there are those malware that are capable to wipe off hard disks at once, a good backup scheme is a must for organisations right now.

They contribute greatly to the overall cost of the cyber crime that the nation has to pay. And the situation is not going to improve. Off the line a little bit, but I have still seen people use Maestro cards that need only card number and one password to make huge transactions. The world has reached quantum encryption and RSA enabled devices. We still face phishing crimes, vishing is the new in. Frauds are on the rise every day.
India has also reached RSA enabled devices but the technology reach to the grassroots is the grey area. If only the population of  India that preaches cyber security uses the safe technologies, its a loss that we are all facing each year. The hard reality is that the villages and small towns are still in the backlog. It is important to move the whole nation together in this technological shift.

Human trafficking via the web has picked up pace lately, bullying and defamation is still happening and are expected to keep happening. The spam check on these networks is minimal and so, spamming is also going to be on the rise.

Its the year of the world cup of Cricket! There is definitely going to be the gambling online and the saddening part is that so much of it goes undetected. To add to the situation, there is no law about it.

The stuxnet attack is one of the most famous attacks under this head note. Stuxnet was used to sabotage Iran’s Uranium enrichment program. Similar attacks can be expected but as far as we perceive it is going to be mostly aimed at government and the corporate world. Security of the nation is much more at risk the physical way.

Though the potential is massive yet the security threats are also prominent. There will be more educated burglaries, privacy violations and medical issues. Wearable tech gives out a lot of information about someone’s location , their activities and lifestyles. The data loss of these technologies will be very costly to the individuals.

Such a good feeling at the end of it. It is expected that this year will mark the introduction of a new or an amended IT Law in India that encapsulates things like online gambling, extortion, spamming and cyber bullying etc. All these types of crime need recognition so that they can be dealt with in a better way