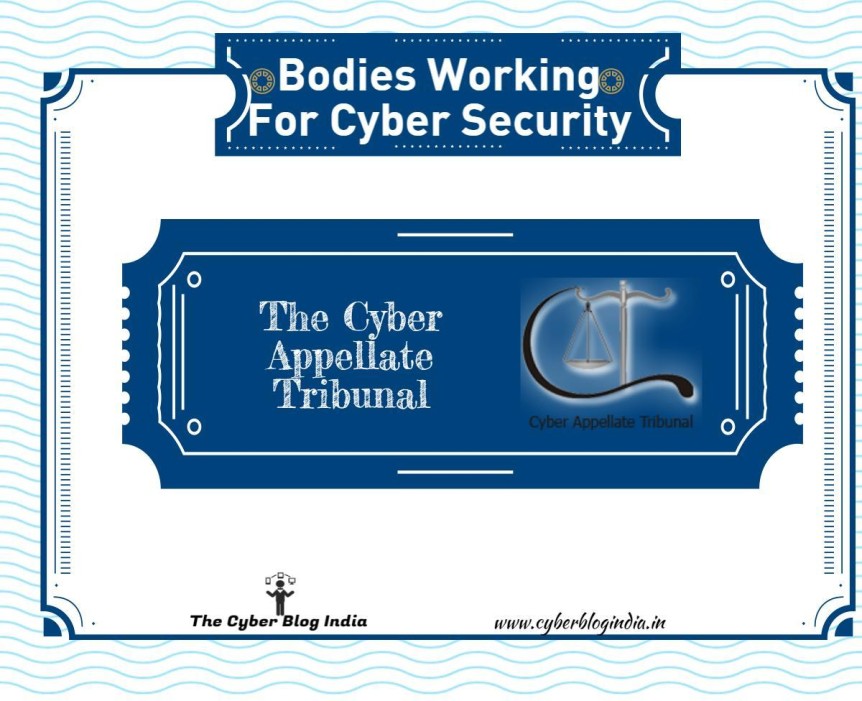 With cyber crime rate on the roll across India, several organisations; both Government and private are working to help combat it.  Along with the knowledge about these happenings it is quite necessary that one knows where to approach. The Department of Electronics and Information Technology (DeitY) recognizes a few such as Cyber Appellate Tribunal, National Informatics Centre and Indian Computer Emergency Response Team. In this post we are going to talk about the Cyber Appellate Tribunal.

Established according to provisions under Section 48(1) of the IT Act, Cyber Appellate Tribunal (further referred to as CAT) was first established in October 2006 in New Delhi.  Present under the guidance of Controller of Certifying Authorities (C.C.A) it is the only CAT in the country. Cyber Appellate Tribunal is vested with the same powers as with the civil court under the Code of Civil Procedure, 1908 but at the same time guided by the principles of natural justice. The Cyber Appellate Tribunal has powers to regulate its own procedure including the place at which it has its sittings. Every proceeding before the Cyber Appellate Tribunal shall be deemed to be a judicial proceeding within the meaning of sections 193 (punishment for false evidence and when a trial/investigation/enquiry is considered a judicial proceeding) and 228(intentional insult or interruption to public servant sitting in judicial proceeding) of the Indian Penal Code and for the purposes of section 196 (using evidence known to be false) of the Indian Penal Code. The Cyber Appellate Tribunal shall be deemed to be a civil court for the purposes of section 195(prosecution for contempt of lawful authority of public servants, for offences against public justice and for offences relating to documents given in evidence) and Chapter XXVI of the Code of Criminal Procedure, 1973.

Any person not satisfied with the decision of adjudicating officer appointed under Sec.46 of the IT ACT, 2008 can  appeal before the Tribunal within 45 days of receiving a copy of the order given by Controller or the Adjudicating Officer. The Cyber Appellate Tribunal allows you to file a case online if you are a Legal Practitioner, petitioners-in-person or an authorised agent, the procedure for which can be read over here. Also, you can directly approach the tribunal in person.

As described under Section 49 of IT Act 2008, the Chairperson of the Tribunal is to head it and other such members as appointed by Central Government by notification in the Official Gazette may help in the process. A review of Functioning of the Offices of the State Adjudicating Officers and Cyber Appellate Tribunal by Centre for Internet and Society shows[1],

“A second branch of the Tribunal was to be set up in Bangalore, no efforts seem to have been made in this regard. Further, the position of the Chairperson of the Appellate Tribunal, has been left vacant since 2011, after the appointed Chairperson attained the age of superannuation and retired. Although judicial and technical members have been appointed at various points, the tribunal cannot hold hearings without a chairperson. A total of 17 judgements have been passed by the Cyber Appellate Tribunal prior to the retirement of the chairperson, while the backlog of cases is continuously growing. Despite a writ petition being filed before the Karnataka High Court and the secretary of the Department of IT coming on record to state that the Chairperson would be appointed within 6 months (of September 2013), no action seems to have been taken in this regard, and the lacunae in the judicial mechanism under the IT Act continues.”

Being a major dispute resolution body of cyber crime related issues, a serious effort by the Government should be made to bring the Tribunal back to track. Also more Tribunals should be established across country to keep the system active because we need to make the people of nation believe, that future of India is cyber secure and justice is not  distant dream.