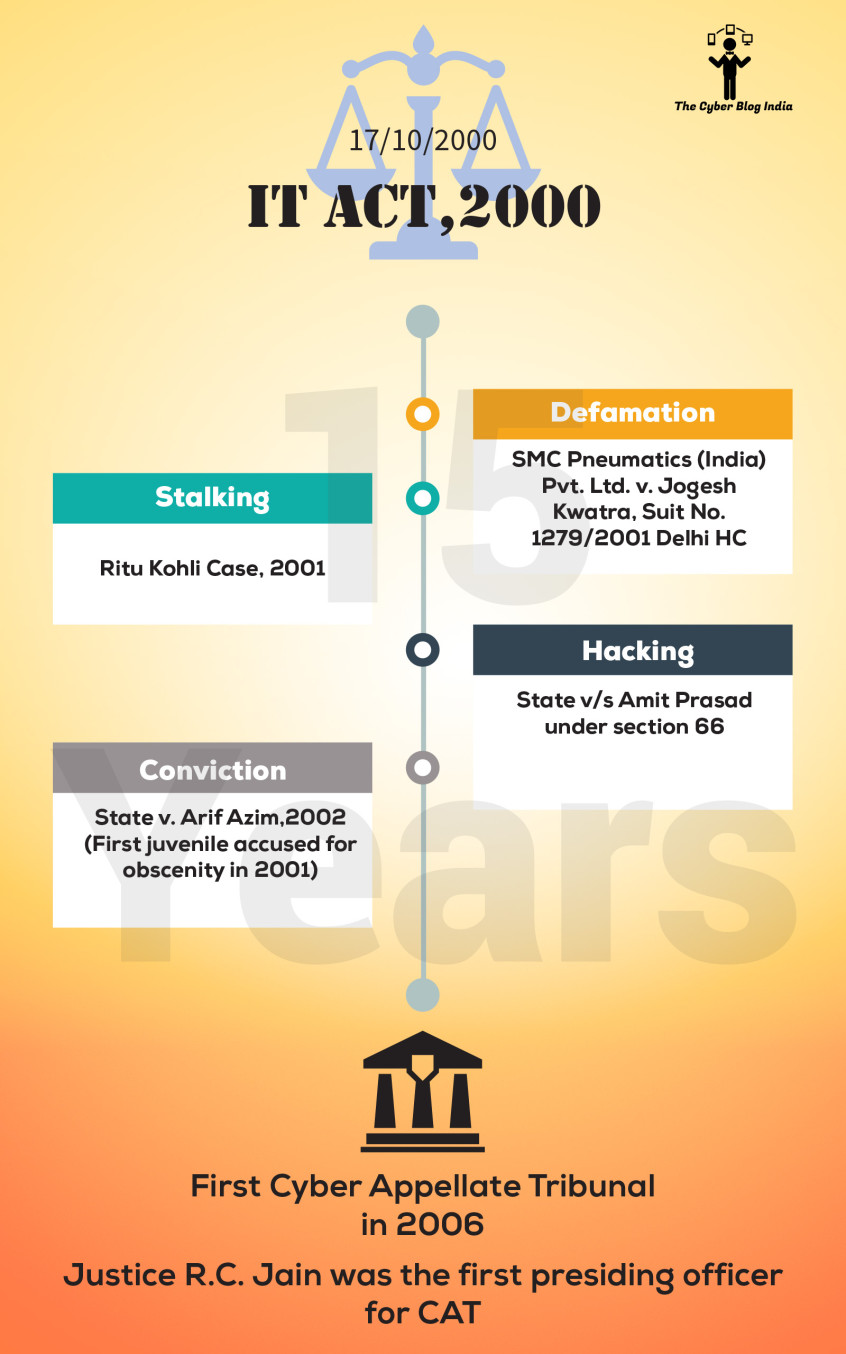 17th October 2000 marked the beginning of nothing less than a revolution in Indian cyberspace. It was a birth of new era where IT Law came into existence defining boundaries, powers and governing people’s action online. Today as we complete 15 years of this revolution, let’s take a look at how far we have come.

The IT Act 2000 did not encapsulate all areas of cyber law. The act was not technologically neutral. Hence, it underwent major amendments in 2008 which introduced the concept of “electronic signature” which had a much broader meaning than “digital signature” also covering other means such as biometrics.

However, the IT Act has never been self-sufficient. IPC and Indian Evidence Act were also amended to support it. The definition of Indian Evidence Act was amended to “all documents including electronic records”. Terms such as ‘digital signature’, ‘electronic form’, ‘secure electronic record’ ‘information’ as used in the ITA, were also inserted to make them part of evidentiary importance under the Act. The important amendment was seen by recognition of admissibility of electronic records as evidence as enshrined in Section 65B of the Act. Similarly one of the major changes in IPC was inclusion of section 354 A to D which recognised women centric crimes such as stalking, voyeurism, sexual harassment etc. Despite the constant evaluation process over all these years, the IT Act still fails to be enough. The virtual world of cyber crime has always led to issues of territorial jurisdiction. Pertaining to this, as a result investigators often try to not accept complaints.

Infographic: First Cases and Conviction with setting up of CAT (Cyber Appellate Tribunal)

The preservation of evidence is another hurdle. There are chances of destroying the evidence as it may lie in some system like the intermediaries’ computer or sometimes in the opponent’s computer system too. Crimes like gambling and trafficking over the internet are not recognised despite several complaints from the public. Privacy continues to stay a myth in the cyberspace. Voices have been repeatedly raised to recognise privacy rights of individual however till what level investigation procedures and privacy can harmonise is hard to say. The recent issue of making it mandatory to save Whatsapp chat is a perfect example of privacy violation.

Today, as we adorn our profile pics with tri-colors supporting PM Modi’s dream of digital India we can be assured that all this is just the beginning. With Internet of Things, there is no scope of reduced rate of cyber crime but being smart digital citizens is what we can ensure. I can sum up the 15 years of IT Act in simple words:  “Begun, but not well done.” We still have a long way to go and need to improvise the legislation greatly but the question is, is law the only thing we can depend on? Another 30 years to the IT Act and yet it will never be enough. Its time we as individuals stop acting and raising voice on social media platforms and take some real time action. You and I need to face the reality, make security a priority and be responsible netizens. If such a change is brought, the development in next 5 years would be way more than where we have reached in past 15 years and yes, the dream of Digital India would be half accomplished.