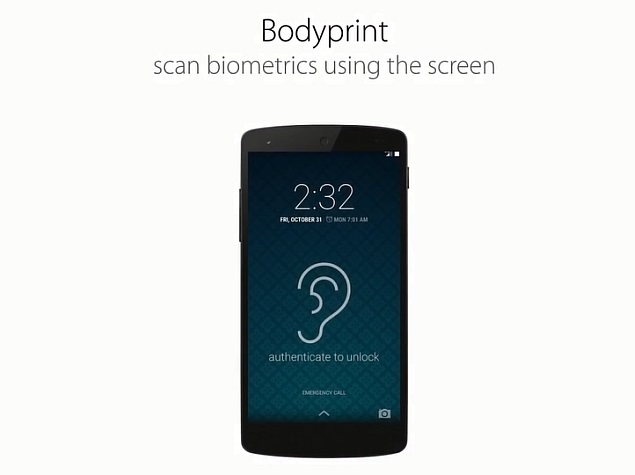 Passwords are dying and it is a fact that companies and individuals are looking for alternatives. Security is one of the biggest concerns of the modern day Digital India and the world. In the midst of all this, there came the apple TouchID but it needed certain special hardware support. How about something that utilizes what is available in your smartphone and still gives you the high end biometric support?What if it uses your smartphone’s touch screen ?The reason that touch screens could not be used for biometrics was the fact that capacitive ones are very low res and capturing the fine whirls of a finger print was very tough. However larger prints from the body can be easily taken and this was the area that needed more experimentation.

This is what Bodyprint is, an authentication system created by Yahoo Labs that turns a smartphone’s capacitive touchscreen into a biometric scanner. But because the scanning device is much larger than a fingerprint scanner, the system allows smartphone owners to unlock their handsets using body parts other than their fingerprint such as their ear when answering a call.

These authentication prints are supposedly obtained by taking and analysing images of the touch patterns on the screen, over the two-dimensional location mapping, which is how mobile devices track and process gestures.”While the input resolution of a touchscreen is about 6 dpi, the surface area is larger, allowing the touch sensor to scan users’ body parts, such as ears, fingers, fists, and palms by pressing them against the display,” the Yahoo Labs team wrote on the project’s web page.

The project claims to have a 99.8% precision. What is expected out of this project is unique, what only high end Android and iOS devices have been able to offer, it might just come as an app to the entry level smartphone users also. It is not yet clear as to how and when this will be launched but most hopefully this will be in the form of an app that will be compatible with all touch screen phones.

This authentication is not just going to be limited to the ear but other factors mentioned below. If it comes into the market it could be one of the breakthroughs in the dimension of authentication that atleast the entry level smartphone users want today.