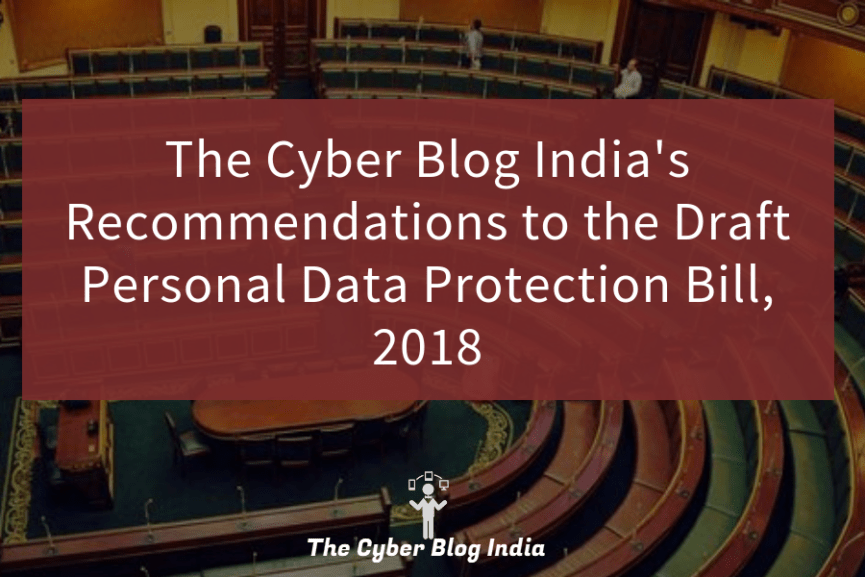 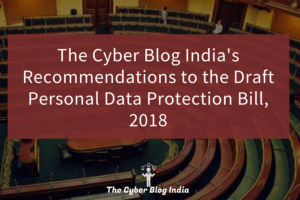 Ministry of Electronics & Information Technology has invited public comments on the Draft Personal Data Protection Bill, 2018. This post contains recommendations made by us to the Ministry. These recommendations can be downloaded in the form of a PDF file from here.

(Please refer to the PDF document for acronyms.)

Issue 1: Scope of the Right

The scope of the right given under Section 27 of the bill is limited only to restriction or prevention of a disclosure of a data principal’s data by a data fiduciary. This right can be availed when such disclosure has –

In addition, clause (2) of Section 27 states that for availing this right, it must override the right to freedom of speech and expression and the right to information of any citizen.

Prima facie, the scope under this section does not cover the deletion or erasure of a data principal’s data stored by a data fiduciary. Comparing this right with similar rights given under various national and international regimes, the scope of this right must be widened. Though this right has gained prominence only in the last decade or so, it is equated with the Right to Erasure.

As per Article 17 (Right to Erasure – ‘right to be forgotten’) of GDPR, the grounds for availing this right are more or less same, but the extent is not. Article 17 of GDPR states that a data subject has a right to erasure of personal data concerning him or her without undue delay and the controller has an obligation to erase the personal data of a data subject on the basis of mentioned grounds. Similarly, The UK DPA 2018 has recognized the same right under its Schedule 6.

The question of whether an individual has a right to be forgotten which includes erasure of data has been brought up before the Indian Courts as well. Such courts include the High Courts of Gujarat, Delhi, and Karnataka. In February 2017, the Karnataka High Court recognised the right to be forgotten for removal of the petitioner’s name from various case reports publicly available results via search engines.[1] According to the Justice Anand Byrareddy who presided over this case, this right can be availed in cases involving women in general and highly sensitive cases involving rape or affecting the modesty and reputation of the person concerned.”

Since the bill recognises various rights of data principals with respect to their data and privacy, the right given under Section 27 shall also incorporate the right to erasure/deletion of data.

Issue 2 – Procedure for Exercising the Right

As per clause (4) of Section 27, a data principle can exercise his or her right to be forgotten by filing an application with the Adjudicating Officer. For the other rights given under Chapter VI of the bill, Section 28 lays down the procedure for exercising those rights by making a request in writing to the concerned data fiduciary. This procedure for exercising the right to be forgotten by stating that the data fiduciaries will be burdened with content removal requests and their decision will be biased towards their own interests. Further, the Committee stated that a data fiduciary is not capable of deciding between the statutory right to be forgotten and the fundamental rights to free speech and information.

Taking into consideration that an Adjudicating Officer (AO) is designated for each state at its capital, the pendency of cases can very well be inferred from the existing judicial system. On the other hand, India has a number of states covering vast geographical areas. For a data principal to appear at each hearing on his application, travelling costs and other practical factors may demotivate a data principal and result in losing the trust in the legal setup prescribed by the bill.

Or for a body corporate having its registered office in Mumbai, the same factors will come into play if they are called to appear before any Adjudicating Officer of the north-eastern states.

2.    Exemptions under the Bill

Issue 3 – No Exemption to the Armed Forces

Under Chapter IX, the bill grants exemptions to certain purposes which are laid down from Section 42 to 48. These exemptions include processing of personal data for –

After going through various legislation enacted by the countries across the world, one can arrive at a conclusion that the armed forces of a country must be given a specific exemption under a data protection framework as the processes and procedures of the Armed Forces are altogether different from the procedure established by the law of the land for civil and criminal courts.

Section 70 of APA 1988, Section 7(3)(c.1) under Division I of PIPEDA, 2000, Section 23 of NZPA 1993, and Clause 7 Schedule 11 of UK DPA 2018 are some of the provisions of legislation across the world where Armed/Defense forces have been granted exemption from the national data protection framework in some way or the other.

Chapter XIII in the bill lays down various offences related to personal data of a data principal. This chapter also contains provisions when offences are done by either companies or Central/State government departments. After around 18 years of the enactment of the Information Technology Act, 2000, we have not been able to realize its potential due to non-consideration of the sensitivity of the harm involved while classifying an offence as bailable and non-bailable. Here in the same chapter, Section 93 specifies that the offences defined in this act are cognizable and non-bailable without considering the sensitivity of the data.

Another reason for non-realization of full potential of the Information Technology Act, 2000 is the power of investigation resting with a police officer, not below the rank of Inspector. The same status quo has been incorporated in the bill under Section 94. This section may be efficiently applicable in urban areas, while the same statement might not hold true for the police stations in suburban or rural areas as they are often headed by a police officer having the rank of Sub-Inspector. In addition, there is generally one police officer per police station having the rank of Inspector who is also designated as the station incharge while there are at least 2-3 subordinate officers having the rank of sub-inspector.

The power to investigate for the offences given under the bill shall be given to a police officer, not below the rank of a sub-inspector.

4.    Power and Functions of Authority

Section 60 & 61 under Chapter X of the bill discusses various powers, functions, and responsibilities along with a prescription of standard Codes of Practice by the Data Protection Authority (DPA). These powers are given with respect to definitions of processing given u/s 3(32), data fiduciary given u/s 3(13), and data principal u/s 3(14). The provisions given under these sections give a blanket power to DPA to regulate the relationship between a data principal and data fiduciary.

As per the definition of data fiduciary, it can be any person including the State, a company, or any juristic entity or any individual who alone or in conjunction with others determines the purpose and means of processing of personal data. This impliedly means that the number of data fiduciaries in the Indian cyber space will be substantially high. In order to balance between the interests of data principals as well as data fiduciaries, an independent board shall be set up to prescribe technical standards for activities defined under the definition of processing u/s 3(32).

An independent board such as the Banking Codes and Standards Board of India (BCSBI) can be set up to lay down the technical standards for various processing activities defined under Section 3(32). The power given to DPA can be limited to enforcement of these standards and suggest appropriate changes to these standards to the said board. This board shall comprise of technical as well as legal experts having domain-specific knowledge in the activities given u/s 3(32).