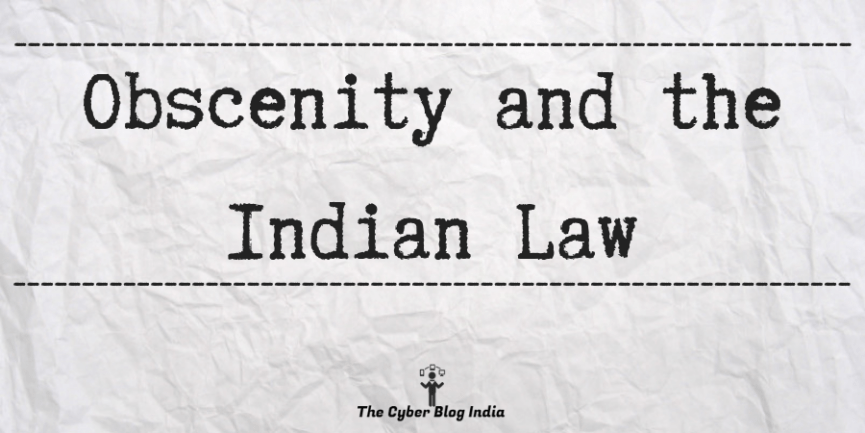 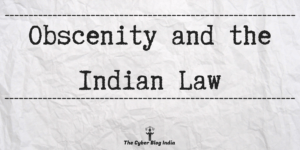 The best way to define obscenity is actually to not define it. Not because it would be lewd, overreaching or offensive in diktat but because no one has actually done it. Obscenity changes with time, values, society, popular culture etc. The number of things that have a direct impact on the standards and level of obscenity are many and locking them into one line or a few lines is not possible.  The legal provisions related to obscenity, however, are mainly given under the Indian Penal Code, 1860 (herein referred to as IPC) and the Information Technology Act, 2000 (herein referred to as IT Act) as far as India is concerned.

The concept of obscenity differs from nation to nation and it depends on the moral and cultural values that have shaped that country. Indian society has always been very conservative about girls and the purity of woman has always been considered essential to sustain a family’s reputation.

The definition of obscenity still isn’t clear. It changes with time and depends on the factual circumstances of the case. What was considered obscenity 30 years ago, might not be considered so now. India has always adopted tests from other countries to determine the element of obscenity in its court cases. The tests have changed over time according to its adaptiveness in the continuously evolving society.

Influence of Obscenity Laws in other Countries over India

The test of obscenity has been laid by several countries based on certain moral principles and decency codes of the particular country. Few of these tests have been adopted by the Indian courts over time to determine obscenity.

The test to determine obscenity under English Law was first laid down in R vs. Hicklin case. The statutory interpretation of the word obscene as given under the Obscene Publications Act, 1857 was the issue. According to the Queen’s Bench, all the materials depraving and corrupting the minds open to immoral influences was considered obscene, regardless of its literary merit. Here, the intention was considered immaterial. If any portion of the work or publication was considered obscene even if that portion was out of context, it didn’t matter, the entire work could be outlawed.

In 1957, the US court developed a new test for obscenity in Roth vs. United States. It was decided that only those sex-related materials which had the capability of generating prurient interest or lustful thoughts would fall under the category of obscene. This had to be judged from the point of view of an average person following community standards, unlike the previous test which focused only on the susceptible readers i.e. the vulnerable sections of the society such as children or weak-minded adults.

Here, it was also held that obscenity is not constitutionally protected speech or press. The materials which cause normal healthy sexual desires will not come under the purview of obscene, the interest shown has to be shameful interest in nudity, sex or excretion. The Roth test is, therefore, sharper and narrower compared to the Hicklin test as it does not cover all the materials that might corrupt but limits itself to the dominant theme of the material and checks whether if taken as a whole has any redeeming social value or not.

In 1966, in Memoirs v. Massachusetts, the US court expanded the Roth test and stated that the last part of the definition i.e. utterly without redeeming social importance element had to be proved to classify something as obscene.

In 1973, the Miller test or the three-prong obscenity test was developed in Miller v. California. This test was for determining what kind of speech and expression can be classified as obscene. The test is based on 3 conditions and a piece of work would be considered obscene only if all the conditions were satisfied. The first two conditions are governed by the community standard while the third prong is governed by what is reasonable to a person of the US as a whole. The national reasonable standard acts as a check on the community standard allowing protection for works that in a certain community might be obscene but at the national level, it should have to redeem social value. This could create conflicting interest between communities as what is treated as obscene by one community could have been treated differently by another.

Fixing national standards for what appeals to be prurient or offensive is not possible practically. The concept of considering a speech obscene if it didn’t have some value was so vague. Several questions arise here like the true connotations of value. On what factors, will a speech be considered valuable or value-less by the court? Why would the government and not the citizens have all the rights to decide? The law relating to obscenity was unclear and writers were afraid of the ‘value’ factor and therefore, were hesitant to publish their works to avoid litigation and punishments. So, the Miller test not only led to the elimination of obscenity but also legitimate speech.

The Journey of Obscenity in India: Related Provisions & Case Laws

The words obscene and obscenity have not been defined in the IPC. Section 292 of IPC in simple terms state that if any material is taken as a whole is lascivious or appeals to prurient interest and tends to deprave and corrupt the persons who read, see or hear the matter contained will come under the purview of obscenity. Section 293 also bans the selling of obscene objects to young persons and prescribes punishments for the same.

The provisions of Section 292 are not applicable to works done in public interest such as in cases of science, literature or religious purposes. Section 292 also conflicts with Article 19(2) of the constitution which is about the freedom of speech and expression, however, the Constitution provides that the fundamental rights are subjected to reasonable restrictions to prevent indecency in public.

The punishment for publishing of obscene material in electronic form is given under Sec 67 of IT Act. It is important to note that any offence related to obscenity in electronic form can only be tried under the IT Act and not IPC as Section 81 of the IT Act clearly states its overriding effect. But sometimes if there is a need, provisions of both the IT Act as well as IPC are considered together, as done in the case of Avnish Bajaj v. State (NCT of Delhi). Since the Internet is global and dynamic in nature, we have Section 75 of the IT Act taking care of the issues related to electronic transmission of obscene material from other jurisdictions as well.

Sec 2(c), Sec 3, Sec 4 of the Indecent Representation of Women Prohibition Act, 1986 also deal with the prohibition of such acts. The Cable Television Networks Regulation Act, 1995 prohibits telecast of obscene acts on television. Section 4 and Sec 5A of the Cinematograph Act, 1952 provides for the examination of films before release. The Young Persons Harmful Publication Act, 1956 prohibits publications which can corrupt a child. Section 294 of the IPC punishes a person for committing obscene acts in public place and also for singing obscene songs. Similarly, Section 354 and Section 509 of IPC are also applicable for punishing crimes against sexual harassment of women at the workplace.

In 1965 judgement of Ranjit D. Udeshi v. State of Maharashtra, the SC had adopted the English Hicklin test which had raised a few problems. The Sec 292 of IPC required any material to be taken as a whole whereas the Hicklin test required the material content to be checked in isolation. So there was a conflict of interest between the two. There were other loopholes too because of which the courts started undermining the Hicklin test. The conditions of the Hicklin test were liberalized and applied until the case of Aveek Sarkar.

In 2006, the Supreme Court in the case of Ajay Goswami v. UOI proposed a new test called as responsible reader test wherein a reader should be cautious in this era of technology. With respect to the online form of obscenity, we have cases like Avnish Bajaj v. State, wherein the question was whether the website was responsible for the publication of the MMS or not. The website which was just an intermediary was held responsible for the same in this case. In another case, M. Saravanan & Dr. L. Prakash v. State, a doctor was punished under Section 67 IT Act for online distribution of lewd photos and videos of a woman just for the purpose of making money.

In the case of Aveek Sarkar v. State of West Bengal (2014), the Supreme Court had said nude can’t be considered obscene per se under the meaning of Sec. 292 unless it arouses a feeling of sexual desire. In this particular case after 50 years of the application of the Hicklin test, the court finally disapproved it and adopted the Roth test. The intention behind it was to decide cases keeping in mind the contemporary national standards and not the group of susceptible persons. But the problem is that the test does not contemplate differential standards for different community and proceeds on a simple basis. Here, only it is the nature of work that matters and whether such work is accepted by society at large or not. There was a lot of confusion as to what exactly constituted obscenity. How can the court draw a different line of a threshold for historically respectable figures in these cases? How do they decide the threshold? But at least people accepted the fact that obscenity is an exception to freedom of speech.

In 2015, the AIB group was also in the headlines for its roast show AIB Knockout wherein there were multiple instances where a celebrity was made fun of allegedly in a very rude and offensive manner. In view of this incident, several complaints were filed. The judgement is yet to come in this case but this is going to be an important precedent in future as this case is going to define the limits of freedom of speech and expression for TV shows involving celebrities and their impact on the society.

Summarizing up, the words obscene and obscenity are not defined under IPC. The courts take the pain time and again to determine whether an act is obscene or not. The determining factors like public decency, social morality and cultural variations keep changing with time. Also to be kept in mind is that obscenity is not protected under the freedom of speech and expression clause of the Constitution. So, the court has always stressed the need to promote a culture of open dialogue until and unless it affects the society at large. Besides all this, at an individual level, caution and being a little responsible can prevent you from falling prey to such problems. Prevention is always better than cure!

2 Comments on “Obscenity & the Indian Law”