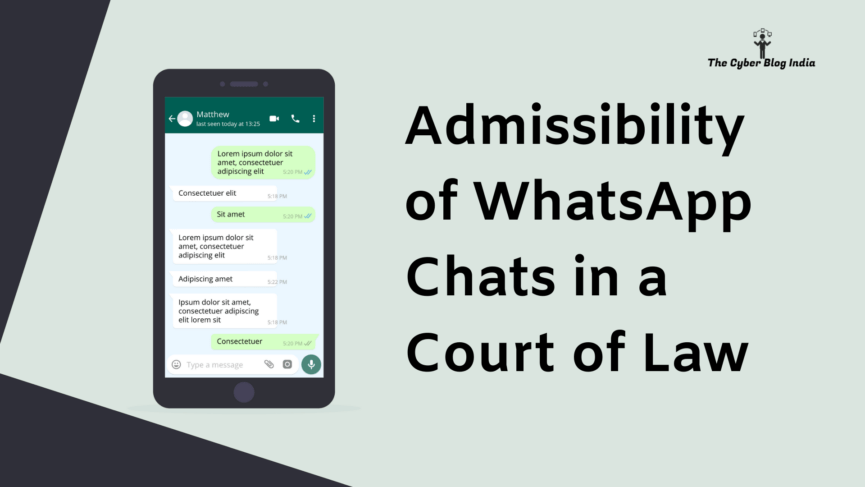 Technology has become an integral part of our daily lives. Over the years, we have seen how internet-based services are being used in committing a crime. On the premises that WhatsApp has become a verb, I will be discussing the admissibility of WhatsApp Chats in a court of law.

Section 2(1)(t) of the Information Technology Act, 2000 defines an electronic record as data, record, or data generated, image or sound stored, received or sent in an electronic form or microfilm or computer-generated microfiche.

Section 3 of the Indian Evidence Act, 1872 defines evidence as all documents including electronic records produced for the inspection of the court. All such documents are considered as documentary evidence. 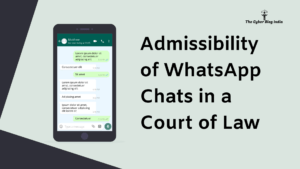 Admissibility of WhatsApp Chats in a Court of Law

In the landmark case of Anvar v. P.K Baseer & Ors, the Supreme Court of India answered all the controversies which were created regarding the admissibility of electronic records in the court. In this case, the honourable Supreme Court made it clear that the requirements given under Section 65B are mandatory. The court also clarified that Section 63 and 65 of the Indian Evidence Act, 1872 do not apply to secondary evidence in the form of electronic evidence. As far as electronic evidence is concerned, only Section 65A and 65B are relevant.

In 2018, this judgement was overruled in the case of Shafi Mohammed v. State of HP, wherein the Supreme Court relaxed the mandatory requirements under Section 65B and stated that electronic evidence presented without a certificate under Section 65B(4) can be relied upon. In cases when an electronic device, which produced an electronic record, is not in the possession of a party presenting the evidence, requirements of Section 65(4) cannot be fulfilled. At the same time, there must be no denial of justice to such parties and the court must relax this procedural requirement if the interests of justice so satisfy.

In the case of Vikas Garg & Ors. v. State of Haryana (2017), the trial court relied on WhatsApp chats to hold the accused guilty of rape, among other offences. Later, the Supreme Court stayed the High Court’s order for bail and as per the latest information available, the Special Leave Petition is pending before the honourable court.

Later in 2018, a division bench of the Delhi High Court dismissed an appeal against the acquittal of accused by the trial court for offences under Section 376 and 506 of the Indian Penal Code, 1850. The bench considered WhatsApp chats between the parties which were duly admitted by the prosecutrix in cross-examination. The court was of the view that the chat contents demonstrate that the prosecutrix has consented for a physical relationship out of her free will and without any inducement.

Recently in January 06, 2020, the honourable Supreme Court granted an injunction under Section 36 of the Specific Relief Act, 1963 in the case of Ambalal Sarabhai Enterprise Ltd. v. KS Infraspace, LLP Ltd. The court held that WhatsApp messages, which are considered as virtual communication, are capable of being considered as evidence. Before the consideration, the meaning and content of the virtual communication must be proved through evidence-in-chief and cross-examination during the trial.

As a matter of practice over the last few years, we have observed that WhatsApp chats, or communication happening over any social media or instant messaging platforms for that case, are submitted in the form of print outs of actual chats. This practice clearly takes WhatsApp chats out of the scope of Section 62 and they cannot be considered as primary evidence. But what will happen if the mobile device which has the actual conversation (the original copy of a WhatsApp chat) is presented before a court? It would definitely make a strong ground to be considered as primary evidence. While the jurisprudence on electronic evidence is still in its nascent stage even after twenty years since the Information Technology Act, 2000 came into force, we expect to see major developments on this subject-matter in the next five years.