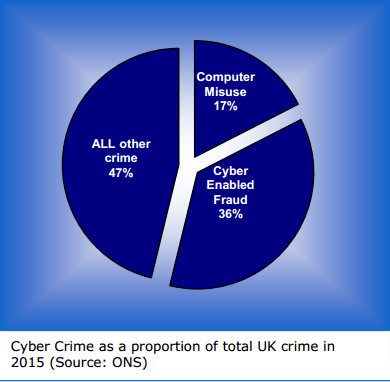 The power of Internet and Digital Media we all believe in, but isn’t it too early? I feel so! The Internet is young and its real potential is yet to be tapped. But in these few years of use, Cyber Crime has exceeded the traditional crime in the UK. We are not lagging behind in real numbers. But the problem is that most of the Cyber Crime in the country goes unaccounted for.

How did Cyber Crime grow so much?

The National Crime Agency of UK has warned in its report published on July 7, 2016, of the total incidents of cyber crime in the country. You might be shocked to know that the figure is astonishing. Roughly 53% of the crime in the UK is now Computed Enabled or Computer Misuse. “The ONS estimated that there were 2.46 million cyber incidents and 2.11 million victims of cyber crime in the U.K. in 2015,” the report’s authors wrote. “These figures highlight the clear shortfall in established reporting, with only 16,349 cyber-dependent and approximately 700,000 cyber-enabled incidents reported to Action Fraud over the same period.”

What is the next threat?

The report forecasts international crime groups and organised crime as the biggest threat to the UK. This makes sense you know because these people are generally not much aware about technology or its use. But the Internet has created a marketplace where trading is easy as never before. As is seen and forecasted by many information security evangelists, Ransomware is the next big thing! The report also goes on to talk about a targeted attack on a company where user data was stolen. And ransom was then demanded to return the data. These attacks also take various technical shapes where users are locked out of devices and then ransom is demanded. Another threat is the Internet of Things. The amount of data being generated is increasing already. When we reach a stage where the entire Internet using population uses smart devices, there will be exhaustion. So, security needs to be the prime concern in the minds of developers and technologists now. The report also goes on to talk about the RAMNIT botnet and DRIDEX malware.

This is one major reason the world needs more Cyber Security specialists and not script kiddies and more Cyber Lawyers and policy makers. However free you may feel the Internet is, but everything ultimately is governed by the Law and in order to combat Cyber Crime and Cyber aided Crime, there needs to be an efficient level of policymaking. In India right now especially, there is an urgent need for a better Cyber legislation.