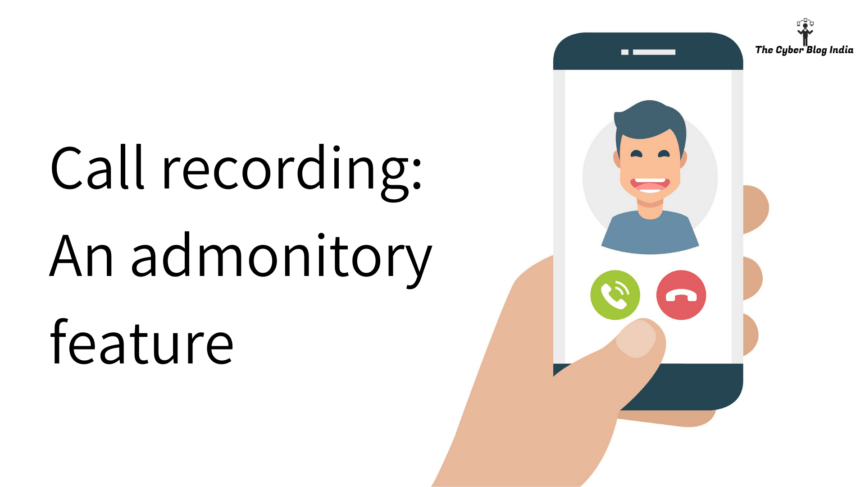 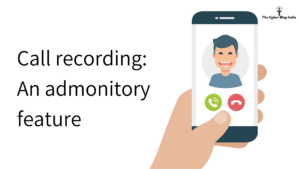 We are all familiar with the call recording feature on our smartphones. It is a very convenient way to maintain a record of any or all the conversations and the information shared therein. We live in an era where data is one of the most valuable assets. There is a myriad of ways using which an individual’s data may be misused, and his rights are violated. In this article, we aim to explore possible threats posed by the call recording feature and how individual rights are affected.

The law relating to phone tapping by a third-party has been thoroughly discussed by various courts. Put plainly, a third-party may not record any conversations between two parties without their consent. While there are certain exceptions to this rule, there is no clarity regarding the recording of a call by a party engaged in the call itself, i.e., recording our own conversations. These days, many smartphones have a feature to record incoming as well as outgoing calls.

If this feature does not come in-built, there are a large number of third-party apps that allow a user to record his calls. In all such cases, the other party has no idea that their call is getting recorded. However, Google has made recent efforts in the latest Android update that notifies all the users that their call is being recorded as soon as anyone of the call participants starts the call recording. This feature is yet to be adopted widely, and it does not address the issue of the other party having a chance to disallow recording.

After the call gets over or when the user recording the call stops the recording, the audio file gets saved to their phone, and it can be used in any way they desire. So, should features like this exist when seen from the perspective of privacy?

What I speak is personal.

The Information Technology (Reasonable Security Practices and Procedures and Sensitive Personal Data or Information) Rules, 2011 defines personal information as any information using which it is possible to identify a person. The Personal Data Protection Bill, 2019 gives a comprehensive definition under Section 2(28) and includes any and all data relating to any attribute of an individual and by which that individual may be identified, and this may consist of any inferences drawn from data for profiling purposes. Section 2(A) of the bill states very clearly that it applies to any personal data gathered within the territory of India by the State, any Indian company, any Indian citizen or persons, or body of persons created under Indian law. This brings call recordings within the purview of this legislation.

This position can be coupled with the right to privacy discussion in the Puttaswamy judgement. The right to privacy has been described as an essential part of human dignity and a natural right. Further, the bench elaborated on the need for a data protection law to address privacy concerns. It can be interpreted that individuals, like you and us, have certain rights over any data that is related to us or can be traced back to us.

When we indulge in any telephonic conversation, we do so to convey some information to the person on the other end. The nature of information being shared can range from generic to personal conversations, including sensitive personal data as given defined under Section 3(36) of the bill. Inevitably, such conversations will be considered as personal data, and they can be related back to the person who shared information on the call. There is no reason as to why the person who is recording a conversation shall have no obligation to maintain the confidentiality of information shared on the call. This would include not storing it without taking consent or at least informing the participant(s) before the recording is initiated.

Status in other countries: One-way and two-way consent

Most of the phone calls we have are between two individuals. Through the Personal Information Protection and Electronic Documents Act, 2000, Canada puts an obligation on organizations within its country to inform the individuals when a call is recorded along with the reason as to why the call is being recorded. However, when an individual is recording a call, there is no such obligation.

In the United Kingdom, a conversation may be recorded without taking consent from the other party, but such recordings may only be used for personal purposes. If these recordings are shared with any third party, such an act is punishable under the existing U.K. laws, including the Data Protection Act of 2018. While in Australia and Germany, the concept of two-way consent is strictly followed, and calls cannot be recorded without prior consent.

Incorporating two-way consent in the Indian legal system can profoundly influence the admissibility of call recordings in a court of law.

According to Section 3 of the Indian Evidence Act, 1872, electronic records produced for the inspection of a court are considered as documentary evidence. Electronic records are admissible as per Section 65A and 65B of the same act. Due to these provisions, call recordings are admissible in a court of law. As far as Indian perspective is concerned, the honourable Supreme Court has set certain guidelines for admissibility of call records in a court of law. However, none of those guidelines require consent for recording in the first place.

Further, the party who has been recorded may not be notified that such a record exists. If a call recording is presented before a court, the other party to the call may take a defence that the statement was recorded against his will and without his consent. Such a piece of evidence is against the fundamental principles of Article 20 and Article 20(3) as it is along the lines of self-incrimination. This may also be considered as a violation of the right to remain silent.

Additionally, the Personal Data Protection Bill, 2019 seeks to recognize the right to be forgotten. By this right, an individual will have the right to restrict his personal data from being disclosed. Certain conditions decide whether stored data is personal or not. Recording a conversation and storing it without the knowledge of other parties plainly puts it at the risk of being disclosed to third parties. We believe that the authorities need to have guidelines regarding call recording between two individuals or any individual and an entity wherein consent, or at least prior caveat, is mandatory. The applications that provide call recording and related features must be directed to incorporate a notification to be sent to all the parties whenever one of the participants starts recording a call. Further, the call recording applications need to be outlawed and removed from being accessible to the general public. Moreover, the courts need to explicitly set the requirements to prove that there was consent or the other party was at least made aware that the call is being recorded before any conversation ensues.

It is not a hidden fact that individuals divulge into personal conversations over phone calls concerning a myriad of their personal and professional issues. A party, revealing such information, places a certain level of confidence to the other party on the call. When confidence is placed on a legal entity, it cannot be without imposing a duty to respect that confidence. Freely available applications and openly advertised features are glaring examples of infringement of rights. Such violations are being ignored by the very people whose rights are being affected.