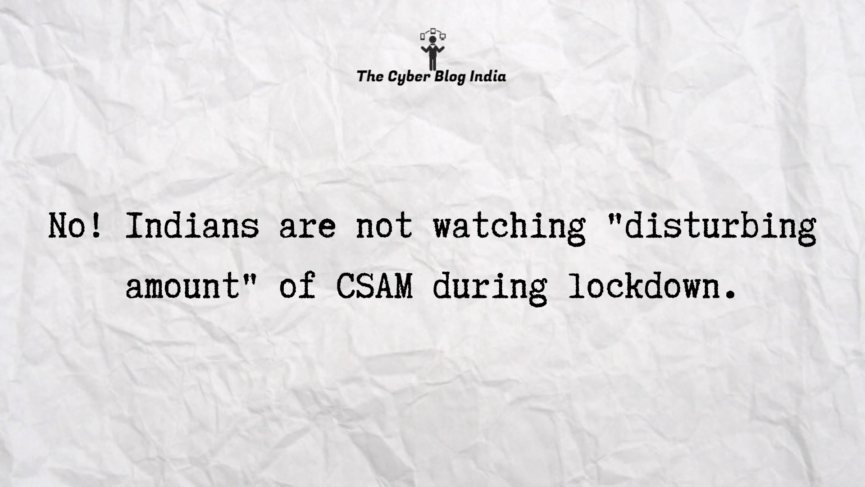 Several reputed media houses including Vice, Times of India, The Week, Hindustan Times etc. reported about an alleged 95% or 200% increase in the demand for child sexual abuse material (CSAM) during the COVID lockdown in India. While I have written several accounts of investigations into the proliferation of child sexual abuse material on platforms in India, such findings are starker and nothing like before, especially during the lockdown period.

Preliminary research about the lockdown and prevalence of demand for CSAM indicates that there is no evidence to say that there has been such a huge increase in demand of child sexual abuse material during the lockdown in India. The numbers in these articles have been quoted incorrectly and out of context.

The 200% increase in demand (which has been irresponsibly quoted by Vice and not rectified despite being informed) has been reported by the Indian Child Protection Fund (ICPF)’s study from December 2019, during a deterrence project undertaken by them against Child Sexual Abuse Material in India. This figure is being misquoted by media houses as happening during the lockdown, of which there is no public evidence available. It has been reported by ICPF how the prevalence of search for child sexual abuse material through specific keywords on the public web changed during that period by 200%. They have also reported that they sent deterrence messages to around 5 lakh perpetrators of CSAM through Google, Facebook, and Instagram. It is my understanding that ICPF used proprietary technology tools to undertake the project but without the data sets being made available from ICPF, we are not in a position to verify the claims.

Note: ICPF has informed us that they cannot share the data sets given the sensitivity of the matter.

As for an increase in demand for CSAM during the lockdown is concerned, I have not found any direct evidence to conclude that might be the case. I am however aware of the fact that there have been increased incidents and the threats that children face every day have also increased amid the lockdown because everyone is leading their lives online for the most part. To highlight, incidents of indecent messaging to children and women along with unsolicited exposure to sensitive content has increased. Like ECPAT, UN and Europol, I too believe that children face more threats during these times and strong actions or deterrence along with building resilience and safety nets need to be taken.