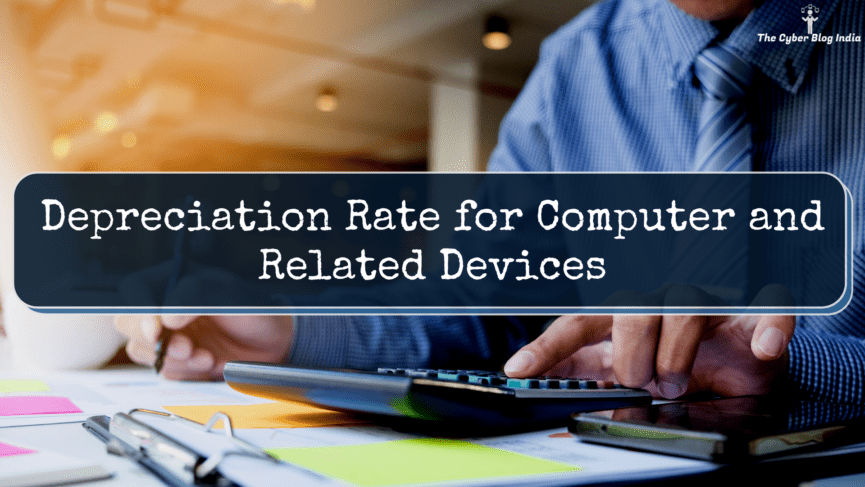 Benjamin Franklin has rightly said – Nothing is certain except death and taxes. While no one can run away from taxes, one can always try to decrease the total tax liability. Depreciation rate allowance is one of the ways to reduce taxable income. In this article, I will be discussing the prescribed depreciation rates on computers and various devices related to a computer system.

An asset refers to something of value or of use to the assessee. For example, computers, printers, scanners, software, etc. It reflects on the assets side of the balance sheet. Generally, there are two types of assets: fixed assets and current assets. The value of fixed assets depreciates over time due to the introduction of new technologies and alternatives. Accounting Standard 6 (AS-6) provides for the treatment of depreciation in the books of accounts. There are two methods to calculate depreciation:

Treatment of depreciation under the Income Tax Act, 1961 (“Act”)

Depreciation is a non-monetary expense. The tax authorities allow the deduction of depreciation from the income arising from the business or profession, as per Section 32 of the Act. In India, the Income Tax Act, 1961 uses the written-down value method to calculate depreciation. The Income Tax Rules, 1962 divides all assets into various blocks. Rule 5 provides for the manner of calculating depreciation. Prescribed depreciation is allowed on the usage of a fixed asset for 180 days or more in the relevant financial year. Otherwise, an assessee can only claim half of the depreciation allowed.

The 1962 Rules, have a table in its appendix that divides assets into two parts: tangible assets and intangible assets. Computers (including software) are a part of the Machinery and Plant block under the tangible assets. Note 7 to this Rule further clarifies that software recorded of any disc, tape, perforated media, or other information device falls within the meaning of computer software.

Scope of the definition of “computer”

The Income Tax Act, 1961 does not define computer, which leaves the scope of litigation open. At present, the tribunal and courts have decided many cases where questions related to the scope of the word “computer” are asked. I have grouped such cases under the following heads for a better understanding.

The Income Tax Appellate Tribunal in Kohinoor India Private Limited v. ACIT did not consider iPads as a computer. In this case, the Assessing Officer contended that the iPad is more similar to iPhone than any computer system. They have similar features, operating systems and functioning. But, the assessee argued that it is not practical to use an iPad as a phone due to its size and weight. The Appellate Tribunal opined that the iPad is utilised mostly for communication purposes, and it can never substitute computers. The Bench in Federal Bank Ltd. v. ACIT ((2011) 332 ITR 319) and Niho Construction Ltd v. DCIT (ITA 3063/Del/2011) had the same opinion. Mobile phones and iPads depreciated at the rate of 15%, like any other plant and machinery.

Earlier, courts did not consider UPS as an integral part of the computer system. In TelCordia Technologies Private Ltd v. ACIT (2012), the court held that UPS is a device only to regulate the power supply during emergency times. It is more like an external help for the computer system. But, the recent precedents have shown the change in this view. In Religare Securities Ltd v. DCIT (2020), the Delhi Bench of the Income Tax Appellate Tribunal accepted the assessee’s claim to depreciate UPS at the rate of 60%. The Bench considered UPS as an essential component of any computer system. A similar opinion has been observed in CIT v. Orient Ceramics & Industries Ltd (ITA 65/2011), Ray Ban Sun Optics India Ltd v. DCIT (5933/Del/2012) and Commissioner of Income Tax v. OCHOA Laboratories Ltd (2017).

In DCIT v. Datacraft India Ltd (2010), the Appellate Tribunal discussed whether routers and switches can be considered under the definition of computer. In this case, the assessee was into the business of data communication and selling networking products. The assessee argued that the router is a significant part of the computer system. It enables the transmission of information between different networks. It also ensures that the information reaches the specified destination. Routers and switches can function only with a computer. Hearing the arguments and relying on the definition of computer given in Section 2(1)(i) of the Information Technology Act, 2000, the tribunal decided in the assessee’s favour.

In M/s Pentamedia Graphics Ltd v. DCIT (2020), the assessee hired programmers to develop software for making animated movies. The making of such movies involved extensive processes such as adding visual effects, making characters, etc. For these activities, software was developed and stored on an information storage device. The assessee claimed a depreciation rate of 60%. The tribunal did not accept this claim and only allowed depreciation at the rate of 25%. It considered the assessee’s software as copyrighted material under the head of intangible assets.

In Royal Bank of Scotland v. DCIT (2016), the assessee claimed the depreciation rate of 60% on ATMs. ATM machines and computers use almost the same software. It is capable of performing logical, arithmetic and memory functions. The Bench considered the definition of the computer given in Section 2(1)(i) of the Information Technology Act, 2000 and the judgement of DCIT v. Datacraft India Ltd (2010). Subsequently, the Appellate Tribunal allowed the depreciation rate of 60%.

In M/s Crabtree India Ltd. v. Assistant Commissioner of Income Tax (2010), the assessee claimed the depreciation of 60% on all the video conferencing equipment. The Income Tax Appellate tribunal relied on Explanation A to Section 36(1)(xi) of the Act and the study materials of ICAI to conclude that each item has to be analysed in detail by the assessing officer to decide whether the device is a computer or not.

LAN enables connected computer systems to communicate with each other. Two or more LANs make a WAN. In Oriental Bank of Commerce v. ACIT (2013), the tribunal affirmed the action of the assessee to depreciate the LAN and WAN equipment at the rate of 60%. The court relied on the definition of computer and computer network given in Section 2(1)(i) and 2(1)(j) of the Information Technology Act, 2000, respectively. In CIT v. BSES Rajdhani Power Ltd (ITA 1266/2010), the Delhi High Court held that computer peripherals are part of the computer system. The Appellate Tribunal had the same observation in the case of Deputy Commissioner of Income Tax v. Global Trust Bank Ltd (2011).

In Tata Communications Ltd. v. Addl. CIT (2014), the assessing officer had imposed a penalty on the assessee for charging a higher depreciation rate on GDS. The Commissioner of Income Tax (CIT) reversed the orders, and the Appellate Tribunal agreed with the CIT’s order.

In Income Tax Officer v. Vaidangi Techno Management Consultants Pvt Ltd (2017), the Appellate Tribunal held that a UID kit can be considered in the definition of computer. The assessee contended that devices such as fingerprint scanners, IRIS scanners, and webcams play a crucial role in making and modifying Aadhaar cards. Without these cards, it is not possible to add a new entry or modify an existing entry. The Tribunal accepted this submission and ruled in the assessee’s favour.

The higher the depreciation rate, the lower will be tax liability and taxable income. From an assessee’s point of view, one would try to include every possible device in the definition of a computer. As we move towards everything digital, depreciation allowance may encourage the transition from traditional to digital modes of doing business. While the government is pushing for Digital India, allowing a higher depreciation rate looks like a reasonable step.