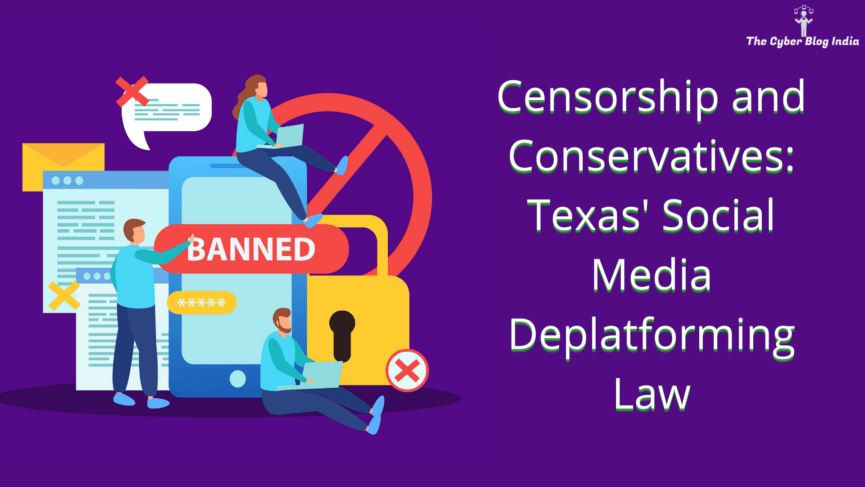 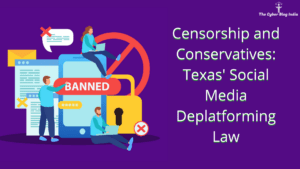 Deplatforming, or no-platforming, is an attempt to boycott a group or individual by removing the avenues they use for sharing information or ideas. One can also define deplatforming as an action or practice of banning an individual with undesirable or objectionable thoughts from participating in forums or discussions on a specific website.

Texas passed the new law known as HB20 in early September this year. This law forbids blocking (or demonetising or restricting) content based on a user or another user’s viewpoint. HB20 also requires transparency requirements on social media platforms to reveal how they promote and censor content. It further mandates that platforms must assess illegal content within 48 hours once they are warned. This is similar to at least one proposal in the US Congress. However, unlike Congress, a state legislature in the US cannot override Section 230 of the Communications Decency Act 0f 1996. The Attorney General may initiate a civil lawsuit against platforms that fail to comply with the requirements of this law.

Which platforms does this law cover?

This law applies to web services that allow users to “communicate with other users for the principal purpose of uploading information, comments, messages, or images”. A web service must have at least 50 million active users for this law to be applicable. It excludes internet service providers, news, and entertainment sites.

The Texas anti-spam law prohibits sending emails with fraudulent, deceptive, or misleading information in the subject line. It further bans misrepresentations in the email address. It defines unsolicited commercial electronic messages as emails delivered without authorisation to someone with no established business relationship. This definition excludes emails sent by an organisation to interact with members, employees, and contractors. A business relationship means a former or current connection between two individuals through voluntary, two-way communication.

One may claim that this law infringes on the private companies’ constitutional right to allow and decide content on their platforms. Another argument can be the violation of the First Amendment as it requires websites to post obscene, racist, discriminating, anti-semitic, and other types of harmful content.

While user content moderation is critical for keeping the internet safe, this law essentially brings content standards under government control. Although the Left Wing may challenge the law, it will come into effect in December 2021. Earlier this year in May, Florida passed a law preventing social media platforms from removing politicians from their platforms. Later, a federal court blocked certain sections after ruling that this law infringed the First Amendment right to free expression.

It is also possible that HB20 is a Republican attempt to intimidate social media platforms into removing objectionable but legal content. It can also be a campaign that conservative legislators have portrayed as an anti-censorship crusade against companies similar to phone companies or other communication utilities. The Florida law has a similar model for governing social media platforms, but it has certain unique aspects such as protections for politicians and an exemption for theme park owners.

The law’s future, as of now, remains uncertain. It is likely to face legal challenges as it is not structured to evade court scrutiny. The Texas law may have a similar fate as that of the Florida law. NetChoice, one of the plaintiffs that challenged the Florida law, condemned HB20; however, they have not committed to bringing in a similar lawsuit in Texas.