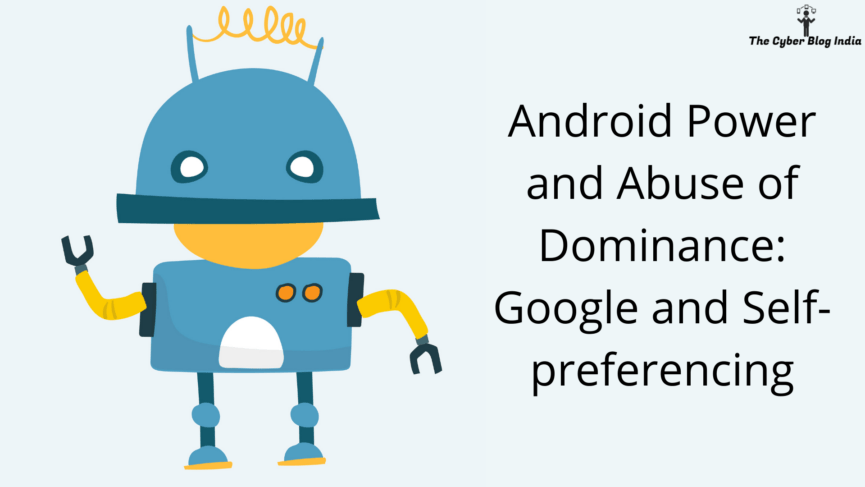 Today, cyber space has become competitive, open, and transparent like never before. In the last three years, the Competition Commission of India (CCI) has investigated the working of an American tech giant, who many believe to be synonymous with the internet itself. As of September 2021, CCI has found that Alphabet Inc. in general, or Google LLC specifically, adopted anti-competitive, unfair, and restrictive trade practices in the mobile operating system.

CCI’s first report came in 2019. Since then, the COVID-19 pandemic has doubled internet usage. As a result, tough questions are being asked against Google’s ubiquitous approach towards Android OS. This article looks at the 2019 report and the most recent finding that Google misused its dominant position through self-preferencing.

Through an order dated November 09, 2020, CCI, in its prima facie order, found that Google has misused its dominance in the market. Subsequently, the Commission ordered a detailed investigation in this matter. The question arises from Google’s recent policy change requiring all Google Play Store app owners to pay a 30% fee on all digital products and services sold. While the informant has not highlighted this as a major unfair practice, Google’s requirement of mandatorily using Google Pay for accepting payments is troublesome. The informant has alleged that this requirement violates Section 4 of the Competition Act, 2002.

The informant further claimed that Google Pay receives preferential treatment and positioning on Google Play Store. As per the 2020 order, the focus is on Google’s favourable treatment of its own affiliates, called self-preferencing. This is the second time that CCI has launched an investigation against Google.

Earlier in April 2019, CCI ordered an investigation for allegations concerning the abuse of dominant position. The informants submitted that a majority of smartphone/tablet manufacturers in India use the Android operating system. Android is an open-source operating system, subject to a basic license. However, a large number of manufacturers combine Android with Google’s proprietary applications and services, i.e., Google Mobile Services (GMS). GMS includes a large range of applications such as Google Maps, Google Chrome, and YouTube. Manufacturers load these apps after signing the Mobile Application Distribution Agreement (MADA) and the Anti Fragmentation Agreement (AFA). End-users like us cannot directly access these apps for installation.

CCI considered Google a market leader in the relevant industry as it accounts for 80% of India’s mobile OS market. It also relied on a European Commission judgement that deemed Google the market leader in general internet search services and licensable mobile OS. In July 2018, the European Commission had fined Google €4.34 billion (₹135.86 crores) for illegal practices to strengthen the Google search engine’s dominance. This case is also known as the search bias case.

It is not surprising that CCI’s 2019 order is a second blow to Google and its services. While the Commission has taken a prima facie stance against the company, it remains to be seen how CCI’s investigative arm will conclude their findings.

Self-preferencing refers to the actions of a company to favour its own products and services above those of its rivals. Section 4 of the Competition Act, 2002 does not specifically identify self-preferencing as an anti-competitive practice. However, the CCI had ordered an investigation as self-preferencing led to the abuse of dominant position in the market. The term “self-preferencing” as a single category of anti-competitive behaviour fails to reflect the wide range of manifestations. While it may result in exclusion in some situations (for example, if the dominant company is essential to its competitors’ operations), it can also foster synergies and improve customer welfare.

At present, whether self-preferencing is anti-competitive is done on a case-by-case basis, considering the final implication of the act. When writing this article, Google has approached the Delhi High Court against CCI to prevent any further illegal disclosure of confidential conclusions. The company has approached the High Court after the investigation findings have been leaked. These 750-page findings conclude that mandatory pre-installation of applications amounts to imposing unfair conditions on the device makers. This report categorically explains and elaborates on how Google misused its position to maintain dominance in the market.

If the news reports are true, Google appears to have abused its dominant position in multiple relevant markets. For instance, these relevant markets can include internet search services and licensable mobile device OS. Google has often implemented one-sided, ambiguous, vague, biased, and arbitrary policies. Considering the extent of Google’s dominance, unconscionable contracts have come out as bundling agreements. The most probable outcome of this case is going to be a hefty penalty. Moreover, the Commission will also require Google to discontinue anti-competitive practices.

One Comment on “Android Power and Abuse of Dominance: Google and Self-preferencing”