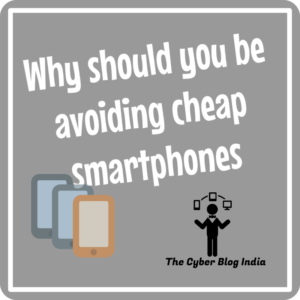 Across the world and most prominently in India, who doesn’t like that great deal that they get on a new smartphone? For as low as INR 1500 or $20 you can purchase a cheap smartphone right off the shelf of a phoney shop just about anywhere. There’s a whole rationale behind this how smartphone components are very cheap and sensors are easily available so smartphone prices should be less naturally. It is not the case, however.

Quite a few educated and aware users and mostly the digital illiterate or the ones transitioning end up buying a cheap smartphone with functionalities or hardware that’s top notch. Nothing wrong there, right? It’s just a very sweet deal.

Your smartphone could be loaded with malware!

Avast recently unearthed 141 different models that come rigged with malware before devices reach the market. Yes, that’s right. It is not the first time that a discovery like this has happened. On many occasions, such has been the case that cheap smartphone makers were caught shipping malware to users. This becomes relevant in today’s scenario because of the growing pace of digitization and internet penetration in India. We are a big market for smartphone makers and any intruder looking to compromise our lives. Most ignorant people will say that they have no problem with malware or that they would just factory reset to be fine.

Threats could range from annoying popping ads 24×7 to constant monitoring.

The applications that have been found to be infected have at some occasions been found to be easily removable but at many were critical system applications that in no manner could be possibly removed: meaning a continuous breach of privacy and security. On this occasion, Avast has reported two different types of malicious activities, both capable of being persistent on a smartphone and compromising user details and activities. Some apps were standalone malware but some even persistent to the level of downloading random malicious apps from time to time, making it highly difficult for the end user to catch up.

Are all devices affected?

No, not all devices are affected. There are some ways to find out if you are (read more here). Having said and gone through that, it is pertinent to make amends to one’s digital lifestyle and only purchase devices, hardware and applications from trusted and verified vendors. That’s all for one of the most basic issues about your smartphone.