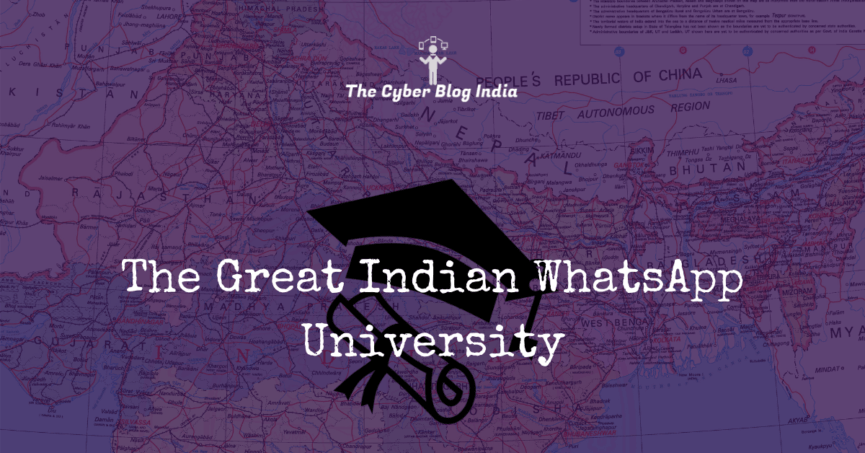 WhatsApp is one of the most popular platforms for communication in India. With a user base of more than 400 million users, it has unfortunately become one of the most misused platforms, as far as misinformation and fake news are concerned. Owing to this, the term “WhatsApp University” has emerged, which is slang for the most ridiculous and unreal news that gets circulated. People now share memes and false information related to election, politics, religion, and whatnot.

The rationale behind using the term “WhatsApp University” is that the universities are a medium to provide knowledge and information. Similarly, since WhatsApp has taken over as the most preferred communication medium in India, it is now being used to share information which is rather funny and unrealistic, and it may have serious sequences.

On searching the term WhatsApp University on any search engine, one can find memes of many of the political leaders in position at present or maybe even find articles with false news about various propaganda. People share such news as WhatsApp forwards, but they do not understand how to differentiate between factually correct news or fake news, or even how to identify fake news.

Statistics to watch out for

In 2017, it was noticed that there was about a 50% increase in the messages related to the propagation of elections through WhatsApp. A Mood of the Nation poll was conducted in 2017 by Lok Niti, and it was noticed that about one-sixth of the members on WhatsApp were added to some group by a political party leader to propagate and win votes for the elections.

Another survey was conducted in 2018 concerning the reliability of the news that is spread through WhatsApp. The results were that WhatsApp is the least trusted source of news with merely 29% reliable information, whereas the news on televisions is about 50% trustworthy and the printed news, i.e., newspapers, magazines, etc. are the most reliable with a score of 55%.

This issue may seem trivial, but it has led to various grave issues like people’s lives being lost owing to fake news being forwarded. No source is 100% genuine today, and even trying to verify whether a piece of news is real or fake is indeed tricky. People generally forward messages on WhatsApp that they think is important in terms of awareness and want their family or friends or relatives to be safe. After another survey in 2018, it was noticed that people in the age group of 25 years and above tend to forward messages without verifying the source. The people within the age group of 18-25 years either merely ask the person they received it from if the news is fake or use search engines, but again, search engines are still not the most reliable sources. This is the sole reason behind fake news traveling so very quickly through WhatsApp.

The WhatsApp University and Election Campaigns

People do not understand that their actions may sooner or later lead to injustice. The internet usage in rural areas has proliferated since the last election in 2014; hence, the parties involved in the 2019 election knew that their biggest platform for propaganda is the internet – with WhatsApp and Facebook being the largest market.

The Hindustan Times newspaper reported that BJP appointed about 9,00,000 people with specialized tasks of localized WhatsApp campaigning whereas, the Congress party focused on posting campaigns on Facebook and distributing it via WhatsApp. Both the parties have been known to be posting misleading and unwanted information time and again to propagate their party. In this year itself, Facebook has taken down about 687 pages or accounts related to the Congress on the grounds of coordinated inauthentic behavior. BJP started mapping electoral rolls against purchased phone numbers and names and based on specific demographics like religion, caste, etc.

They started targeted messages to win votes that were not necessarily true. The same was stated by Mr. Shivam Shankar Singh, a former BJP data analyst who worked on regional elections in 2017 and 2018. The national spokesman, Mr. Gopal Krishna Agarwal, denied that the party had any official set up on WhatsApp for their election propaganda and also stated that the forum was merely used as means of communication between party workers.

Mr. Singh also stated that there were about 2,00,000 pro-BJP WhatsApp groups in northern Uttar Pradesh, the most populous state in India. The problem with the platform of WhatsApp is that unlike Twitter or Facebook, the content on WhatsApp cannot be checked, monitored, or filtered as the platform is private, and the users are protected by end-to-end encryption.

WhatsApp has time and again said that this is unlikely to change as they believe that people must be able to communicate online with full privacy. At the same time, it is pertinent to note that almost half a million Indians are being tricked or fooled into exercising their fundamental right to vote based on fake news and fake promises that are forwarded as WhatsApp messages.

A voter may be under the impression that he has made an informed decision when he put in his vote, but he is entirely unaware of the reliability of the information being shared on WhatsApp and other social media platforms. Though certain initiatives have been taken by WhatsApp to put a check over WhatsApp forwards, however, they are many loopholes that can be used to bypass the implemented measures. For example, merely copy-pasting a message will take it out of the “number of times” forwarded count.

WhatsApp has also shared recently that it bans about 2 million accounts every month globally that send automated spam messages. Further, the updated privacy settings allow a user to decide who can add him to a group. Earlier, a user could be added by anybody to a WhatsApp group. It has been found that due to these measures, WhatsApp has reduced fake news by 25%, but multiple fact-checkers have stated that the problem of fake news is still rampant.

There does not seem to be a full-proof solution to the problems created by our homegrown WhatsApp University. One possible solution is to change the privacy policy and monitor each message specifically, but that seems to raise a few eyebrows as it will be a grave violation of the right to privacy of individuals which was declared as the fundamental right under Article 21 of the Constitution in the landmark case of Justice (Retd.) KS Puttaswamy v. Union of India. So, for users like you and me, the bottom line is to keep a check on the messages we share on messaging platforms and making sure we do not end up graduating from the Great Indian WhatsApp University (read as become a victim of fake news and misinformation).

On April 10, 2020, our friends at LcmediaHouse published a series of photos with a sarcastic take on the admissions into the WhatsApp University. These photos are apt and in line with this post. They are embedded below.

#WhatsApp University takes pride in imparting rumors and idiocy into the minds of people across the globe.