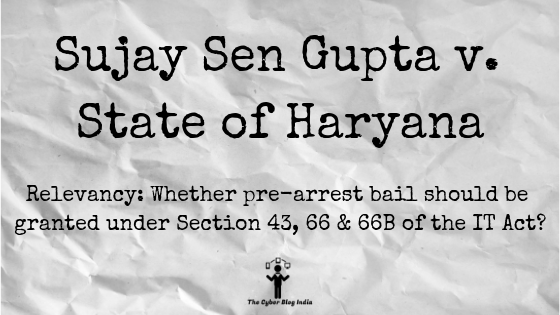 Relevancy of the case: Whether pre-arrest bail should be granted under Section 43, 66 & 66B of the IT Act?

Relevant Facts of the Case
• The Petitioner (Sujay Sen Gupta) was the president of Global Market Research Division of the complainant M/s Technova India Pvt. Ltd. He had access to highly confidential information such as the business models, client database and strategies.
• Petitioner along with co-accused (Yajana Prakash) misappropriated the confidential proprietary information for business diversion to entities like “CATALISE” and “CIBC”. This caused huge loss to the complainant company.
• The petitioner and co-accused Ritesh Dudeja defrauded the complainant by establishing a new company owning substantial shares in it. There is email proof to show the same.
• The complainant filed an FIR and the investigation was transferred to the Economic Offences Wing of the Gurgaon Police, which sought custodial investigation of the petitioner. The petitioner here has applied for pre-arrest bail.

Prominent Arguments by the Advocates
Mr Ashok Aggarwal, counsel for the petitioner, argued that the offences alleged don’t require custodial interrogation and the IT Act, 2000 has necessary provisions for dealing with the same by way of damages and penalty, bailable imprisonment being less than 3 years.

Opinion of the Bench
• Custodial interrogation is required as the accused is not likely to cooperate if armed with a protective order.
• It is also required to elicit how confidential information was downloaded and leaked by the accused.

Final Decision
• The court believes the prayer of the petitioner for a pre-arrest bail to be meritless and hence rejects it.