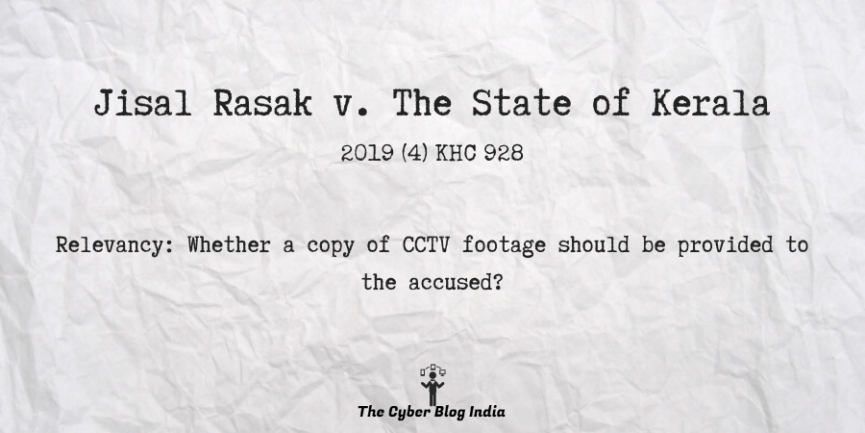 Relevancy of the case: Whether a copy of CCTV footage should be provided to the accused?

(a) the CCTV footage relied on by the prosecution,

(b) the FSL report obtained from the Forensic Science Laboratory relating to the CCTV footage, and

the learned Magistrate has egregiously erred in concluding that the electronic evidence relied on by the prosecution is a material object and refused to furnish copies of the same to the petitioner. He contended that Section 3 of the Indian Evidence Act, 1872 defines “evidence” as all documents, including electronic records produced for the inspection of the Court. Referring to the relevant provisions of the Information Technology Act, 2000, it was argued that a document under Section 3 of the Indian Evidence Act, 1872 would definitely include electronic records as defined under Section 2(t) of the Information Technology Act, 2000.

resisted the submissions advanced by the learned counsel appearing for the petitioner. Relying on a decision of this court in Sherin V. John v. State of Kerala 2018 (3) KHC 725, he argued that the law recognises a third category of evidence in addition to oral evidence as well as documentary evidence, which is ‘real evidence’ or ‘physical evidence’ and it consists of material objects other than documents produced for the inspection of the Court. It is urged that material evidence is not covered under Section 207 of the Cr.P.C. and there is no law, which provides for the issuance of a copy of a material object. Alternatively, it is argued that the electronic record having been produced as a material object, it is a piece of real evidence and will not fall in the category of an electronic record or document. If that be the case, the prosecution is not obliged to serve a copy of the same to the accused and for the self-same reason, the accused cannot clamour of prejudice and claim it as a matter of right.

(a) rendered or made available in an electronic form; and

(b) accessible so as to be usable for a subsequent reference.