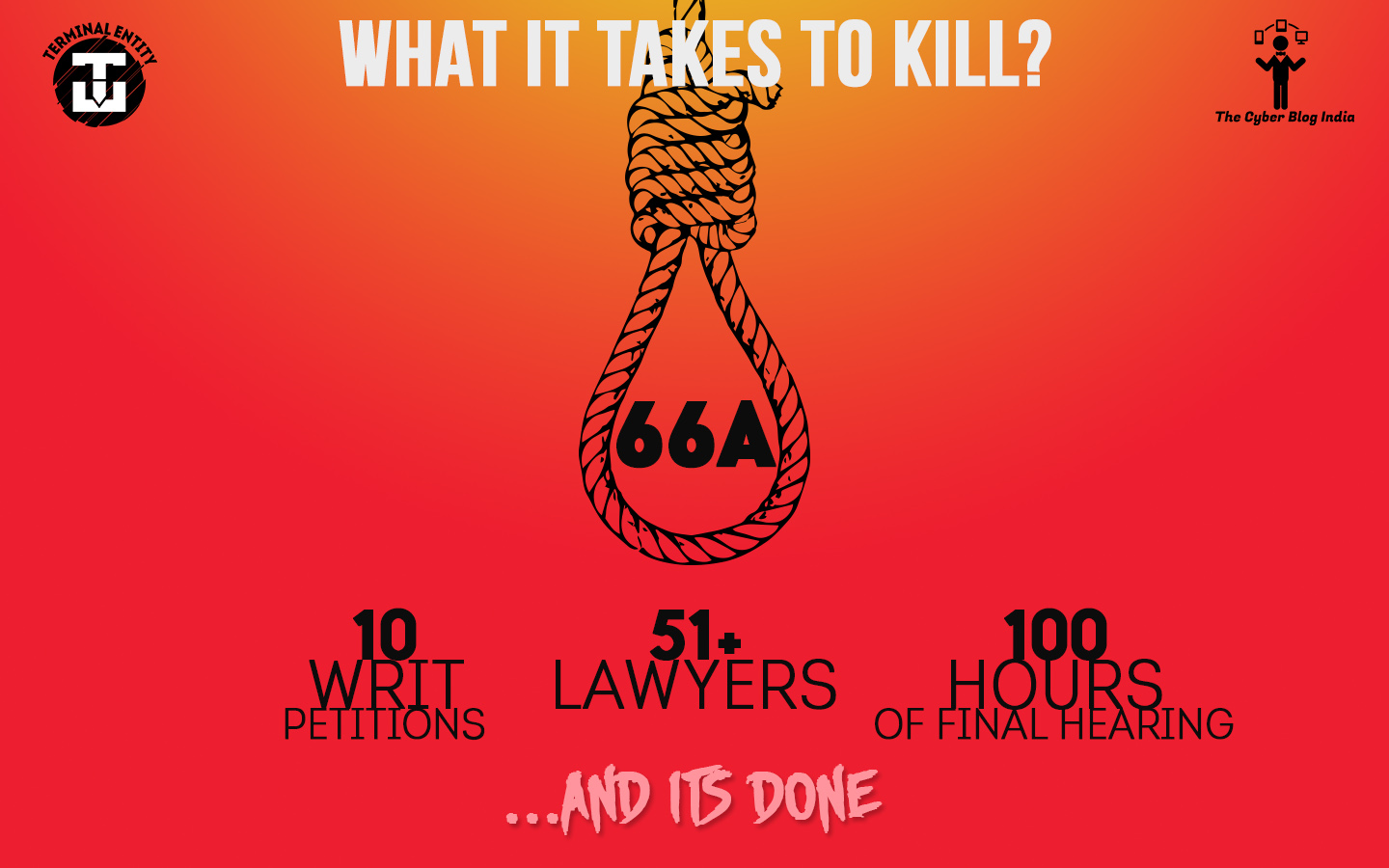 I died a sudden death on 24th March 2015. My life was a short one, but I made a difference in the little while I lived. My journey began with the 2008 amendment of the IT Act. The President approved of my arrival and i finally came into being from February 5, 2009.

I gave tremors to anybody having free thoughts about writing ill, grossly offensive stuff, false information to cause hurt or injury and electronic mail just to cause annoyance, or inconvenience via means of computer device or any other communication device. I was your gateway to jail for a term of three years and an additional fine if the court deemed fit. Yes, that was my power.

My parents were a bunch of lazy lads believing in the concept of copy pasting legislation from around the world. Not enough thinking was put into my making hence I was born under-developed. It was a little difficult to distinguish between my nose and lips. That fine line of clarity didn’t exist and that was the reason why my downfall began. I was too helpful so people camouflaged behind my skin and put me to bad use. A few arrests happened under my name. Finally November 2012, a PIL was filed by Shreya Singhal claiming that I was unconstitutional and impinge upon the freedom of speech and expression guaranteed under Article 19(1)(a) of the Indian Constitution. This was in regard to arrest of two girls for posting status and commenting over death of a political leader. Supreme Court then gave an order relating to the above PIL stating that I was not to be misused and no one can be arrested without approval of the Deputy Commissioner or Inspector General.

Two legislative moves were suggested during 2013 to introduce my better half which was to give my life a better picture. A Private Member Bill was introduced in Lok Sabha for the same but since IPC contained my sister and brother concerns the Bill was withdrawn. Next was a proposal to introduce 4 changes of which the major was making me a part of Fundamental Right of the Constitution. Rest were all patches and fixes to give my underdeveloped body a better look and comprised of defining me better, reducing my power to punish and so on. Sadly, this too could never turn a reality. I missed on another chance. My future didn’t seem very bright. On March 20th 2015 a little chap, Vicky Khan was arrested for sharing a critical post about senior minister Azam Khan of Samajwadi Party.

Well that was the last thing that could happen because 4 days later on 24th March 2015 I was sentenced to death by the Supreme Court. In its 123 page verdict Supreme Court declared me violative of Article 19(1)(a). The Supreme Court throughout thought highly about the citizen who criticized me claims that it was all important for a democratic nation. The view of general people is held above the law makers. Throughout, the Judgement is only revolving around how vague and broad I am and how I fail to impose a reasonable restriction on 19(1)(a). The court pointed out that a penal law would be void on the grounds of vagueness if it failed to define the criminal offence with sufficient definiteness. Court also said, “Ordinary people should be able to understand what conduct is prohibited and what is permitted. Also, those who administer the law must know what offence has been committed so that arbitrary and discriminatory enforcement of the law does not take place”.

I believe in the fact that one comes has to leave one day. I don’t regret my short life but not bringing up any other sister concern like me is not a good idea. I was a little under developed, thanks to the principal of legislation making still being followed in India. I was put to wrong use by some but I was the one who held back millions when they seemed to gather a little courage to say or to do beyond what is right. All that was needed was a change or a rebirth. Such act of eradicating is in no case justified. You people busy celebrating the new independence just bestowed upon you, little do you realise that you’ve entered into open battle grounds. Not long before a cyberwar would be witnessed and none would be shielded by my armour, the armour of 66A.