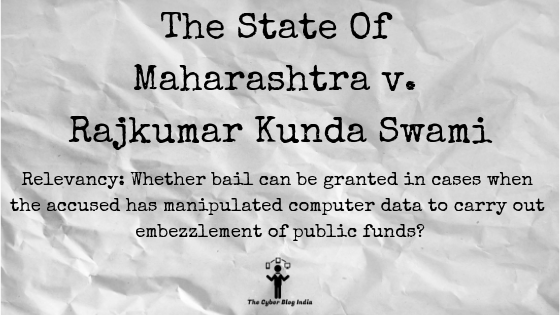 Relevancy of the case: Whether bail can be granted in cases when the accused has manipulated computer data to carry out embezzlement of public funds?

Relevant Facts of the Case
• The complaint was lodged by Shri Yuvraj Patil, Assistant General Manager, Abhyudaya Co-Op. Bank Ltd., Vashi Branch, Sector 17, Navi Mumbai on 28.7.2001 against the respondent Rajkumar K. Swami, who was working as a clerk in Abhyudaya Co-Op. Bank and looking after the maintenance and repair of the computers in the said Bank since 1997 and all the accounts and transactions were computerised in the Bank since 1995.
• The respondent committed fraud to the extent of Rs. 81 lacs by opening fictitious accounts and manipulated the credit entries in the said accounts without depositing any amount, by tampering with the computer data in the computers, and he has withdrawn amounts from the said accounts and thus defrauded the Bank.

Prominent Arguments by the Advocates
• The learned prosecutor submitted that the respondent is involved in a serious offence of embezzlement of the public fund to the tune of over Rs. 2 crores and the same could not have been done by him without active assistance from other Bank staff and therefore to ascertain the whole racket, further custodial interrogation of the accused was very much necessary. Therefore, the Investigating Officer should have been given a proper opportunity to investigate the matter thoroughly by in police custody.
• The prosecutor submitted that the learned Magistrate did not have the power to grant bail and especially in view of the fact that property worth Rs. 26 lakhs were recovered from the accused; it can definitely be said that there is a reasonable ground for believing that he is guilty of the said offences under Section 409 of the I.P.C.
• The defence lawyer submitted that the orders of the learned Magistrate and learned Sessions Judge are perfectly just and legal. It was further submitted that as the period of 15 days from the date of the first remand is over long back the accused cannot be remanded to P.C.R. in view of provisions of Section 167(2) of the CrPc.

Opinion of the Bench
• The bench examined that the accused has committed criminal breach of trust in respect of public funds invested in the Bank by the public and the learned Magistrate was in serious error in not granting further police custody.
• The order passed by the learned Magistrate was absolutely perverse, apart from being illegal. The learned Magistrate should have realised that bail orders passed in such ugly haste are bound to hamper investigation thereby resulting into miscarriage of justice and the order is so arbitrary, capricious, illegal and perverse.