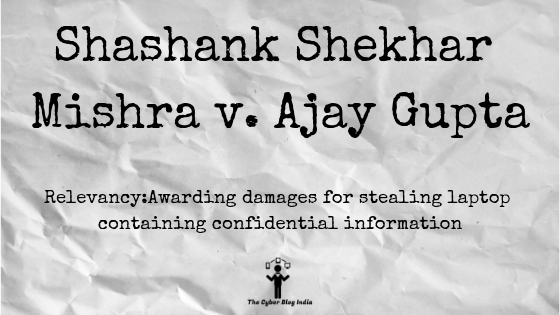 Relevant Facts of the Case
• The plaintiff, a student of Sri Ram Murti Smarak Institute of Technology, Barielly, is a tech savvy professional. On 9th November, 2010, the plaintiff purchased a laptop for a consideration of Rs. 34,100/- for the purpose of web designing and various technology related activities. He was also storing various user IDs, passwords, for creating, storing and retaining the original web designing templates, designs and styles and other data in the laptop. Confidential financial information of the plaintiff including details of his mother’s bank account as well as credit card information belonging to his cousin brother was stored in the laptop.
• The plaintiff claims to have got various accounts on e-commerce website www.algulfnet.biz where he had accumulated thousands of points by participating in various surveys conducted by the website and had generated 212 e-Pins whose value is alleged to be Rs. 7,63,200/-.
• On 25th April 2011, the defendant barged into his room along with two anti-social elements and snatched away his laptop which contained his personal and sensitive information substantial to him.

Opinion of the Bench
• The right to privacy has been recognized as a valuable right of an individual which is implicit in his right to life and liberty which is guaranteed by Article 21 of the Constitution. The privacy of the plaintiff has already been invaded by the defendant snatching the laptop containing the above-referred private information since he thereby had access to that private information of the plaintiff.
• The bench recognized the limitations of Section 43 of the ITA, which provides penalty for damaging a computer or computer system, and held that in this case, where the laptop was snatched and contained personal and confidential information, the civil court has the right to award damages, despite section 61 of the IT Act, 200 which requires that when possible, cases must be heard only by the Cyber Appellate Tribunal constituted under the Act.